Everybody in my family dies of cancer.  That’s just what we do.

That was my understanding from the time I was old enough to know what cancer really was.  By then I had already lost my grandfather to cancer, and was in the process of losing my great-aunt as well.  I would go on to lose my aunt, uncle, and cousin, and finally, and most brutally, my momma.  It was a clear causal link in my mind: Draugsvold blood means cancer.  Period.  End of story.

But then I had this moment of clarity.  It was while my momma was dying, and I was trying to convince myself that I would somehow figure out how to put one foot in front of the other without her.  I was in the bathtub, trying desperately to relax my body in the hopes that my mind would follow.  I was running through the procession of cancer deaths in my family, the different types of cancer, the kinds of lives my people had lived… and I had this epiphany not too dissimilar from being shot out of a cannon.  My grandfather was an alcoholic and a heavy smoker.  My great-aunt was a heavy smoker.  My aunt was an alcoholic and a heavy smoker.  My uncle was an alcoholic, heavy smoker, and drug addict.  My cousin was a heavy smoker and a drug user.  My momma was a heavy smoker.  I thought about how in my family, in our world, vegetables came from cans, exercise and athletics were for people who weren’t smart enough to read, and medical orders were really suggestions, at best, and hey, who gives those doctors the right to tell me what to do, anyway?  I suddenly realized that my family had never prioritized healthy self-care, studiously maintained the traditional diet of poverty (heavy on starches and low on lean protein),  and relied almost exclusively on chemicals and mood-altering substances and activities in order to cope with the harsh realities of discontent.  It was a horrible and sad realization, that my entire family was so immersed in poverty and depression that it was slowly and predictably imploding at its own hands.

And then I realized that I had never thought to separate nature from nurture.  I had assumed that everyone in my immediate family grew cancer in their bodies because we were somehow genetically predisposed, because collectively, we drew the short genetic straw.  It never occurred to me that maybe, just maybe, we all got cancer because we all treated our bodies like shit.  It felt like an absolute revelation.  I felt like this path I had always assumed was my destiny might not be so predetermined after all. I felt like I might be able to escape my family’s version of the Kennedy Curse.

I had already started working out with a person trainer at that time, but I immediately doubled my efforts, and then, months later, doubled them again.  I completed a triathlon, and then the Portland marathon.  I eventually cut all gluten from my diet, kicked up the amount of lean protein I ate, lost almost 60lbs, and gained a good 10lbs of muscle.  Along the way, I even became a personal trainer.

I was motivated by, and almost obsessed with, my desire to break out of my family’s historical  trajectory.  I would think about my beautiful momma, depleted by chemotherapy, robbed of her joyfully ever-present curly hair, emotionally exhausted by the process of dying, and I knew that I had to do better.  I had to take all the strength she had given me, and I had to be healthier, longer.  Because I rarely ever have a cocktail, because I don’t smoke, because I’ve never used drugs, because I am very physically active, because I routinely eat my body weight in fresh produce… I felt certain that I was going to break the mold and that the cancer curse would not extend to my generation.

What’s that phrase, something about how God laughs as we make plans?

Yesterday I had my first radiation treatment, 1 of 30, for the cancer in my right breast.  It’s gone now:  I underwent surgery to have the malignancy removed, and my surgeon is certain she removed everything gnarly and is pleased with the clean margins and clear lymph nodes.    But the standard care is a course of radiation, to prevent re-occurrences and to make absolute sure that all the malignancy was removed; any remaining traces that may have been overlooked will be zapped into oblivion by the radiation.  It took a lot of soul searching on my part to agree to the radiation treatment, as well as one weeks-long delay while I explored other options and had additional testing completed.   But at the end of the day, after several conversations with my radiation oncologist and after shopping for and finding an awesome and trustworthy medical oncologist who made the same recommendation, I made the commitment and I showed up.

There’s something weird and haunting about stepping into a cancer center.  It’s an intimidating and noble building, filled with oncology specialists and researchers and social workers and genetic counselors and technicians and radiologists and, ultimately, people like me, all wandering around with oblivious and disbelieving faces, sometimes faking confidence, but always with the same far away look in our eyes, so desperate to be seeing anything other than the walls of this place.  I remember when the cancer center was built – I live close enough that I watched it grow, day by day, beam by beam, and I was filled with a sense of gratitude that such a state-of-the-art facility was going to be of use to so many cancer patients in Portland.  Of course I never dreamed that I would be one of those people.  You’d think I would have almost planned on it, even asked to be consulted before they chose the carpet and paint colors, with the familial certainty with which I have always walked the world.  But somehow it never occurred to me that I would be there for myself.  My grandpa, great-aunt, aunt, uncle, cousin, momma… but not me.  Somehow.

So it was with a heavy but resigned heart, and the memory of all of my people who had gone into similar buildings so many times before me, that I walked into the radiation suite Monday morning.  I was terrified, visibly shaking, feeling light-headed from the anxiety, and expecting cold taupe rooms, “comforting” muzak, and stuffy, “professional” cordiality.  What I got instead was a delightful woman named Carle, the lead tech on my radiation team, and a Minnesota Vikings fan.  That last bit might seem like a trivial detail, but as a Wisconsin-bred Green Bay Packers fan (and we all know that “fan” is short for “fanatic), these were fighting words… until she came out of the closet as a secret Packers fan because, as she succinctly put it, “everybody loves Aaron Rodgers.”   Problem solved.

My beige expectations were similarly shattered when I walked into a radiation room that looked like an experimental medical deck on the Starship Enterprise.  The machine itself is positively enormous, with a shiny black table surrounded by these crazy circular arms that whirl and click and hiss a bit as they rotate around the prostrate body below.  Almost as impressive – and thankfully less expensive --  is the mountain-scape  4-part backlit photo mounted into the ceiling, obviously meant as a lovely distraction for those of us who come there on a daily basis to have the cancer literally burned out of our bodies.  Oh, and the music was Jenny Lewis and Johnny Cash. 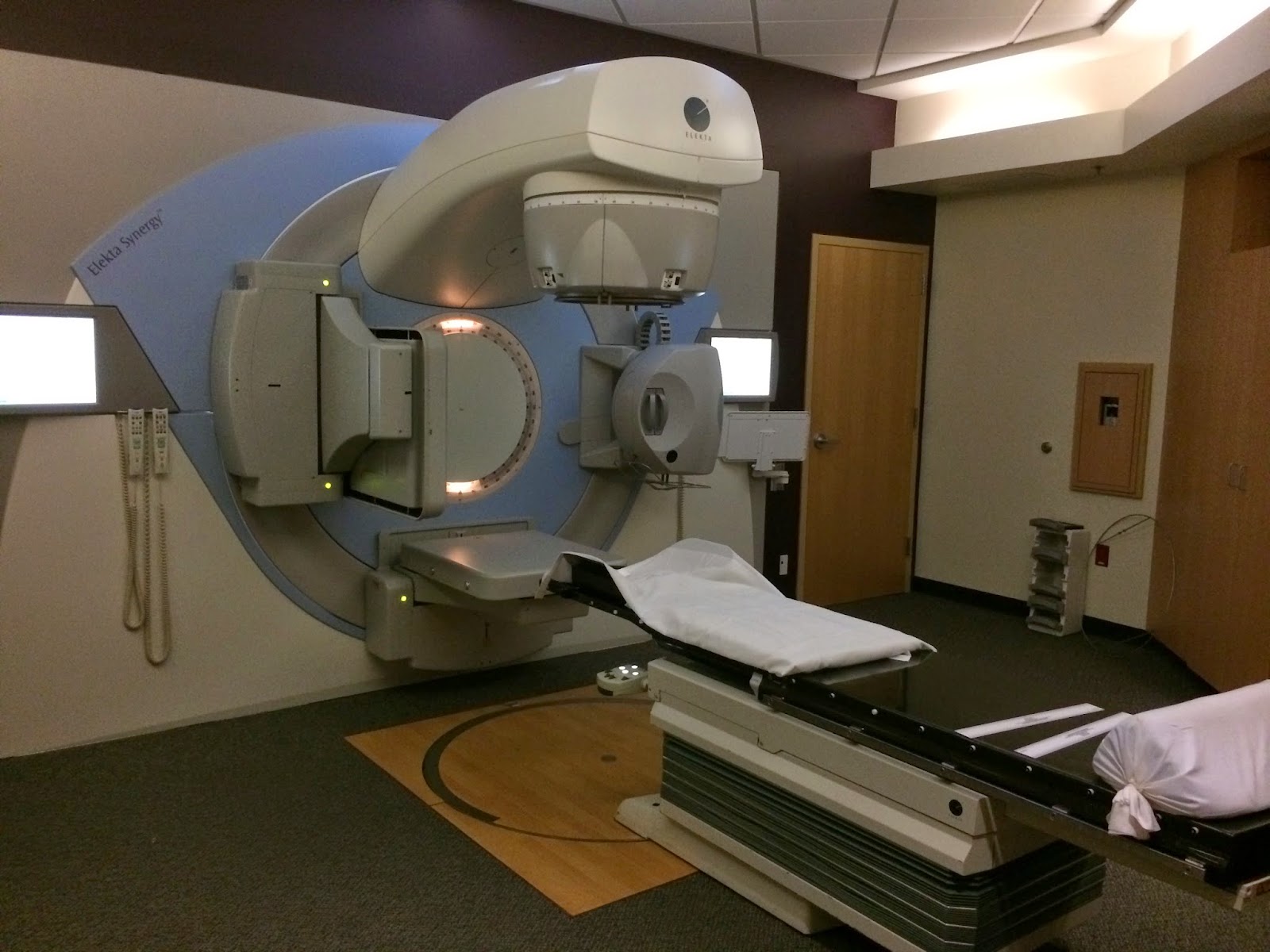 The first step was to get me properly lined up on the table.  I had already completed a “mapping” session, at which I was CT scanned, measured, and tattooed with three tiny freckles (one on my breast bone and one on the side of each rib cage), all designed to make sure the radiation hits all the right spots and none of the wrong ones.  So Carle and her posse used all those marks and measurements to line me up with green laser beams that criss-crossed my body like some USA Today map of American weather patterns.

After a few X-rays, Alice, my radiation oncologist, came in to approve all the settings and get the ball rolling.  Alice is great.  She says everything positive three times.  When I first met her and she confirmed that my cancer was DCIS, she said, “good good good.”  When she examined my surgical site to check on its healing, she said “nice nice nice.”  When I asked her if she thought I would tolerate the radiation well, she said, “yes yes yes.”   I will be terrified if she ever responds to me only once; I will immediately know something is desperately wrong.

Alice gave the go-ahead and left the room.  Carle said we were ready to radiate, and she and the rest of the team left, too.  I lied there, starting at the mountains in the ceiling, wondering if I was going to feel any different.  I knew I wouldn’t feel the radiation hit my body  – radiation feels exactly like getting an X-ray: it feels like nothing at all.  But I wondered if I would FEEL it, in some intuitive way.  Like, maybe my body, knowing some foreign and weird and potentially dangerous thing was happening, would alert me to trouble, some high tech Danger, Will Robinson!  I mean, if I put my fingers on a hot burner, my fingers and my brain instantly communicate so I get my hand off the damn burner.  Because burning is bad for you.  Because heat can destroy delicate and vulnerable tissue.  And if a simple surface level burn can inspire such an immediate reaction in the brain and the corresponding body part, I wondered how my body would react when the burning happened from the inside out, and when there was nothing to instinctively move?

The machine made its tell-tale sounds, getting itself into position to start my first radiation treatment.  I lied still, tried to breathe normally, and waited.  The machine kept adjusting itself while I stared at the bright blue sky above me, buying so completely in to the visual that I started to imagine what it would be like to camp somewhere on that mountain that was recessed into the ceiling.  After a minute or so, I started to feel a bit impatient, wondering when the treatment was going to start, when I would have answers to my questions, when I would be able to leave, put on deodorant again, and maybe stop shaking. 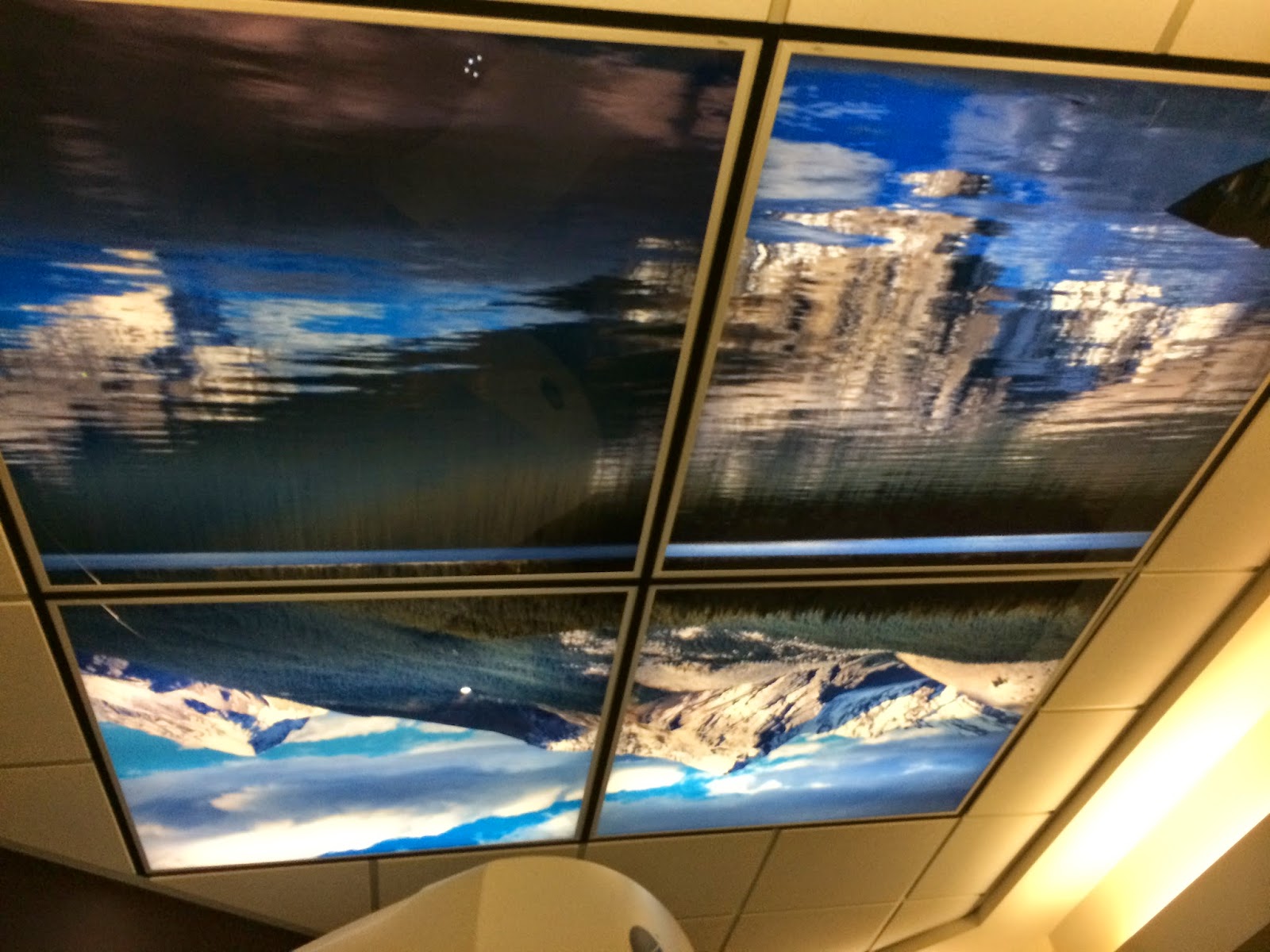 And then Carle came in and said we were done, that I had performed like a champ, and that she would see me tomorrow.  It had happened, without me even knowing.  I was so busy wondering how my body would feel that I didn’t realize that it never felt anything at all.  No warning bells went off, no whistles, no flashing lights or sirens.  I just hung out, mentally setting up tents and camp stoves, while I received my first dose of radiation.  Treatment 1 of 30, in the books.