Something really fucked up happened after my 21st radiation treatment.

The treatment itself was a bit unusual, in that I went in in the morning, instead of my normal afternoon appointment.  When I realized I had another medical appointment that would create a conflict, I called Carle, who promptly rolled out the red carpet and made me feel like it was no inconvenience at all for me to change her schedule at the last minute.  That girl is just a doll.

She also played me Michael Jackson’s “Don’t Stop ‘Til You Get Enough,” which struck me as oddly appropriate for radiation treatment.

The thing is, I’ve been really, really tired lately.  There have been several days when all I could do was sleep.  And it’s a different type of feeling.  I mean, the only words I know for it are tired, exhausted, wiped out, etc.  But none of those are quite right.  Believe me, I’ve experienced some dog, bone tired before.  I mean, I spent over 5 years teaching full-time at George Mason University while also doing a PhD full-time.  So I know what it feels like to barely keep myself upright from the fatigue.

But this kind of tired is something I have never experienced before.  I used to have something I called “breast bone tired.”  It was this particular kind of feeling I got, usually right before I fell asleep.  I would feel something in my breast bone, a settling, a shift, something – who knows.  But when I felt it, I knew I was about to drift off to sleep.  It was comforting, particularly for a life-long insomniac.

Lately, I’m starting to feel breast bone tired in the middle of the day, while driving, while working, once at the grocery store.  It’s my body’s unmistakable sign that it simply must have sleep.  It’s startling, when it happens at moments when I obviously can’t just grab a corner and a blanket and take an hour.  Or two.  Or three, as my “naps” have been these days.  I have had to cancel a whole mess of client sessions because of this overwhelming need to sleep, something that is so fundamentally unsettling that I can’t adequately give it words: I know that my clients trust me to show up and help see them through a huge commitment they have made, and when I can’t do that, when I have to take care of myself instead of taking care of them, it feels like absolute shit.  I feel like a failure, like I am letting them down. I know that’s bullshit – I do.  And I know they want me to practice good self-care.  But it still feels that way.

So I wanted to see how having my treatment earlier in the day would affect my energy levels, if at all.  Of course it did.  By 3.00 in the afternoon, I actually wondered if I needed to pull the car over to the side of a quiet road and take a nap; I was driving home from one of my nurse practitioners’ offices, and seriously didn’t know if I could make it without falling asleep.  I think the drive is about 8 miles.  That’s it.  And I was struggling so hard to keep it together.  I did all the things I was taught as a teenager, stuff to help fight fatigue while driving: I cranked up the radio (which didn’t help, since I’ve had a headache for 5 days now), turned the AC on full-blast, rolled down all the windows…and said a quiet little prayer.  I made it home in just enough time to fully collapse on my couch.

Later, I was thinking about a woman I just met.  She did what so many people do when they find out I’m in treatment for breast cancer: they tell me their personal stories of people they know who have had it.  It’s sad, to realize that almost everybody has a personal breast cancer story.  But it’s also sad that people seem to think I will be in any way comforted by the ones that don’t end well.  This story was about a woman who was diagnosed over 20 years ago, went through chemo and radiation, and then had a second occurrence about 7 years ago.  It’s been so horrible for her that she decided not to have the chemo anymore, and she is just, as I was told, “waiting.”  As in, waiting to die.  “Clocking time,” as my great-grandmother called it.  “She has good days and bad days.  The bad days are… you know.”  No, actually, I don’t know.  And I don’t want to know.  And I also don’t want to spend the next week trying to figure it out!  I don’t understand this type of “help.”

All this was running through my head while I was lying on the bed with my breast covered in pumpkin.  My burning is definitely getting more pronounced, and the heat from my skin was melting the pumpkin so that it was dripping off me in every direction.  I tried to maintain a sense of humor about it, appreciate the absurdity of the fact that my boob was melting canned pumpkin while I watched House of Cards on Netflix.  But I couldn’t get that story out of my mind.  And I was so tired, and my eyes were burning, and my head was pounding, and my breast bone was screaming at me that it was time.

After the remaining pumpkin was scraped off my breast, I went to the bathroom to drag myself in to the shower.  When I looked in the mirror, I was horrified.  I didn’t look tired, or exhausted, or even in pain.  I looked positively haggard.  My eyes looked dark and sunken, my skin looked dry and fleshy, and I just looked like I was…waiting.  It was the first time I have looked at myself and actually thought I look like a woman with breast cancer. 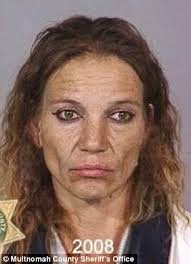 I just stood there, staring into the mirror, wondering what in the holy hell happened to me.  I am a really active person.  I love to exercise and go hiking and tell stories and write music and troll second-hand stores and play with my kitties and stand under waterfalls and go bowling and cheer on my Green Bay Packers and getting cancer was positively not a part of my plan.

And there I was, in the mirror.  Just one more woman with a breast cancer story.  And I’ll be damned if I didn’t look the part.