There’s a white board in the radiation waiting room, where patients write inspiring or encouraging messages to one another.  There’s a lot of “you got this!” kind of messaging, and sometimes some sort of congratulatory message to someone who has completed treatment.  There’s always a car or truck of some sort – someone in radiation really loves her automobiles.

Today there was also this: 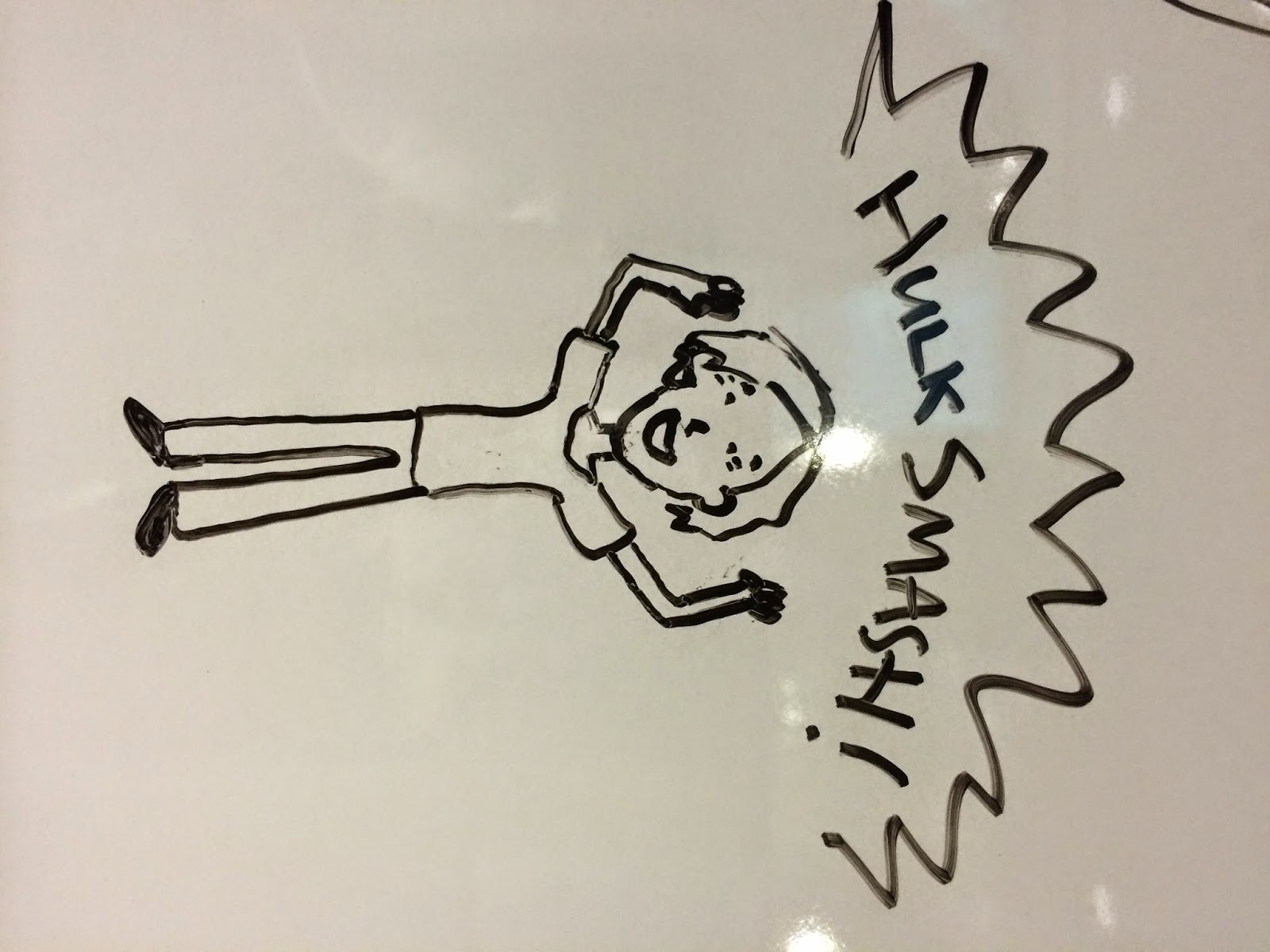 While this figure doesn’t look strong enough to smash much of anything (particularly since I can't figure out how to rotate the picture so this sideways 90lb weakling could at least have a fighting, vertical chance), I decided to take it and run with it.  Because one of my breasts is starting to turn darker than the other one.

I guess I thought it would take longer than this.  I don’t know why I thought that: I started to feel heat from my breast after only 4 treatments, so I don’t know why I’m surprised to realize that my skin is starting to tan.  Maybe it’s because it appears to be the very first tan I’ll have had in my entire life, and I just don’t know what to do with it; I probably feel the way a Floridian would feel if her skin turned green.

Or maybe it’s just one more sign, one more conclusive sign, that this is real, and no matter how hard I try to laugh it off and make friends with the techs by bringing vegetables from my garden or lipstick my way through it, it’s real.  I try, when I lie on that table, to tell myself stories. I make to-do lists for the day.  I mentally plan my client sessions, write emails, and return phone calls and texts.  I sing to myself, work on new lyrics for songs I hope to write, tap my feet; as long as I don’t shift my torso or my arms, I think it’s okay.  I let my mind wander as much as it can, so that I see as little as possible of this huge and imposing metal eye staring down at me, moving in circles around me, beaming heat and radiation and danger into my body, into my breast, under my skin.   I avoid it as much as I can while it zeros in on me, and I’m trapped.  Radiation feels like having a stalker. 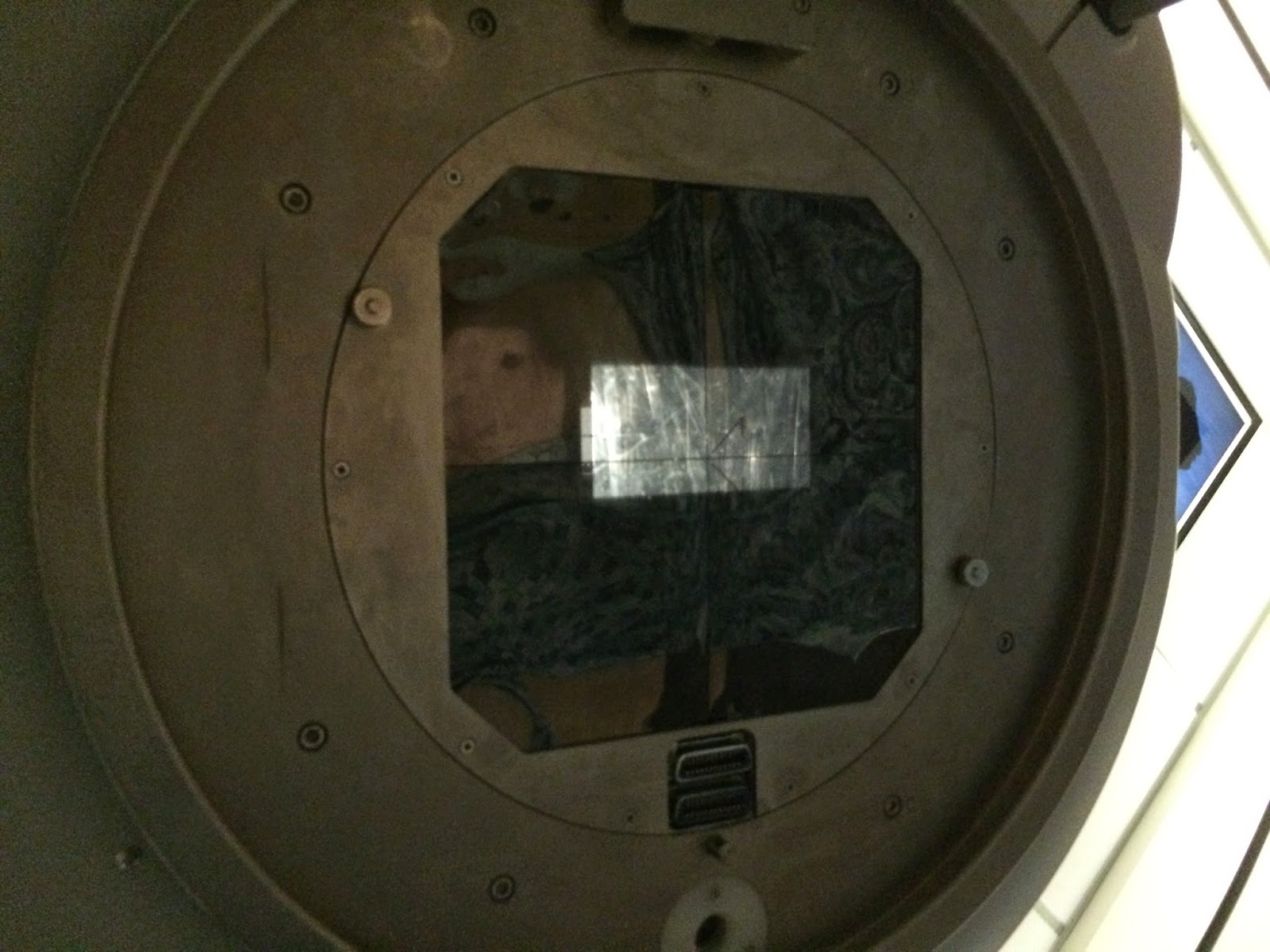 And my breast is getting darker.  To anyone else, I’m sure the change is almost imperceptible.  But every time I take a shower or change clothes or put aloe on my skin, it jumps out at me.  I’m naturally pale.  Like, very pale.   My momma used to say I had “peaches and cream” skin and an ex used to call my complexion “alabaster.”  Those were both sweet and biased assessments from people who loved me.  But let’s be real: when I was in middle school, the kids used to call me “Casper” because I was so white.  So the slightest bit of color on my skin sticks out like a sore thumb.  At least it does to me.  It’s part of why I am so vigilant about sun block; I’m aware that my skin is particularly susceptible to damage.  And silly me, I always thought sun damage was the only kind of skin damage I would need to be worried about.  I never worried about this.  I never worried about this.  But the eye keeps following me, and I’m only 8 sessions in.

I’m afraid it’s going to smash me before I have a chance to smash anything at all.  Including that impressive and ugly machine.  Including cancer.  Including my fear that I’m going to spend the rest of my life wondering what is growing inside of me that I don’t know about, waiting to take me down when I’m not looking, when I get distracted by something shiny over there, when I think I’m doing everything right, again.  It’s become a contest of wills, a race of sort.  And I’m not sure how fast I can run.