I had a great conversation today with this lovely woman named Dawn, an oncology social worker who is based in the radiation department.  I found her to be genuine and smart and not afraid to laugh at the hard stuff.  She also pegged me as a bit Type-A right off the bat.  I told her that I have a label maker and I’m not afraid to use it, and she said, “yeah…that sounds about right.”  Not a bad assessment for someone who had known me a total of about 8 minutes.

Dawn and I discussed resources for women in my position and a little bit about what to expect as the treatment goes forward, but we spent the vast majority of our time together talking about how other people are reacting to my cancer and treatment.  And she wasn’t in the slightest bit surprised by anything I said.

It seems that I have been spending a rather disproportionate amount of time navigating other people these days, when I need to be spending as much of my energy as possible navigating my own process., and apparently this isn’t uncommon.  It’s not because the people in my world are dicks; quite the contrary, I’m blessed to have a few really lovely, attentive, giving people in my world, people who want to help and want to care for me when I really need the help.  The problem isn’t that I don’t have anyone in my life to support me.  The problem is that they don’t know how to do it.

And that’s just really legit.  I mean, it’s gotta be weird to be in their shoes, to have someone they care about diagnosed with something scary, to not be able to “fix” it, to not know how to best help, what to say or not to say, when to be strong and stoic and when to allow their own fears to come out.  There’s no rule book for this crap.  It’s undoubtedly a feeling of profound impotence, and that’s a very complicated and shitty feeling with which to sit.  And I respect that my friends are doing the very best they can.

The problem is that there seems to be a rather consistent difference between what I actually need in support and what people want to give me in support.  My strong suspicion is that this is the cancer treatment equivalent of a first world problem – I know that.  And I don’t mean to sound ungrateful.  But I don’t need anyone else to: 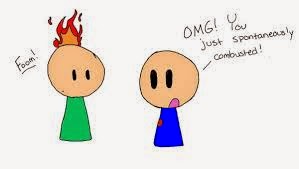 And what I really need is for that support to continue.  My fear is that after a few weeks, when this becomes routine, people will forget that I’m still living this experience.  When people stop checking in, because they inevitably forget, I’m afraid I’m going to feel alone.  And the timing of it sucks, because the effects of radiation are cumulative: the burning and the fatigue will become gradually worse as the treatment moves forward.  So when I will inevitably need the most support and help is when most of the people in my world will have moved on, forgotten it’s still happening, pushed it to the back burners.  And that’s reasonable – this is my experience in my body, and I certainly don’t expect it to be front and center in anyone else’s life.  But I will have no choice but to keep it front and center in mine.  And what will I do with it then?

But all is not lost, because Carle the Wonder Tech, who, it turns out, is a sucker for a sappy power ballad, played Air Supply for me today during my treatment.  So there’s that.  And my first week, sessions 5 of 30, are done.